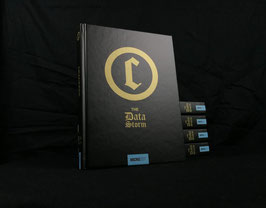 
Software piracy in the 80s and 90s. The second book in the CRACKERS series. Digital visions and copy parties, intrigues and industrial espionage, disk traders and pirates. Elitism, escape and persecution: The mysterious life of crackers and their scene organisations shaped the computer age.

Zero-day warez and 101% cracks with “++ trainer” are the golden standards among the C64 crackers. In the early 1990s, software pirates organised themselves and the underground scene grew into a global distribution network. Uploading and downloading became daily business.

The BBSes (Bulletin Board Systems) became the distribution centres, the software goldmines. And when the console games became copyable, some sensed a business opportunity. But how did teenage crackers deal with the Far Eastern black market? And what led to perhaps the largest European piracy raid of the 1990s? Which role did American calling cards play? And how were the groups able to distribute their cracks via public commerce?

CRACKERS: The Data Storm illuminates the networks and visionary entanglements of the BBS age. The world of the underground elites is spinning faster and faster. Their digital utopia sets them apart from the harsh reality of a doomed games industry. With 90-page interview section.

Please note: photos are used for the purpose of illustration. The number of delivered goods are listed above

“CRACKERS is an exciting and exploratory book experience in the spirit of the Borders Trilogy. In it, we will look at the illegal side of computer creativity and how cracking computer games evolved as a phenomenon in the 80s.​”